Back round to the front

First fit the lower control arms to the x-member and then swing the ARB up to their mounts.
.
You’re not wrong there Darth

Maybe with the old thinner ARB, but not with this one

Undid everything, then fitted the TCAs to the crossmember. Because it’s a tight fit with the new bushes, I cleaned up the crossmember, lubed up the bushes and used a small trolley jack to gently squeeze the TCA upwards into the welcoming arms of the crossmember. Twatted the retaining bolt through good an’ proper

I then swung each TCA upwards and hooked it into the bottom of the strut. After a bit of faffing about, to get maximum span on the TCAs for slotting in the ARB, I jacked up the struts of each side so that the TCAs swing up and the distance between the outer holes is greatest. I fixed one end of the ARB to the TCA on one side, then not having a ratchet strap of any form, I instead got a two tonne lifting strap and looped it over the ARB and slowly twisted it tight with the aid of a wheel brace (the curved end on the brace made it feel safer, if nothing else). You only need to make a couple of turns to get the strap real tight and compress the ends of the ARB enough to slot it home on the other side. 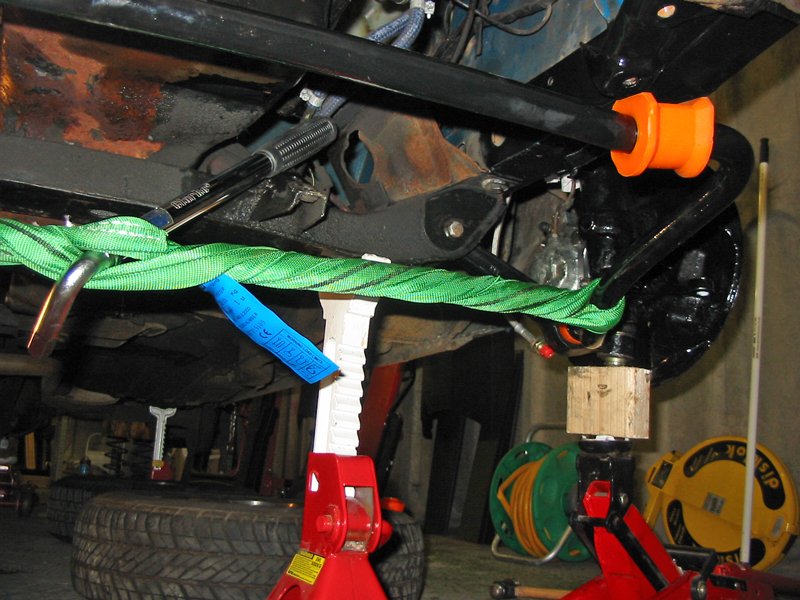 Whilst I’ve been able to get at things, I’ve cleaned up the chassis rails, worm poisoned and given them a protective layer of Hammerite. It should still be fine by next year’s MOT and one less thing to worry about

Of course, that now makes the engine mounts and sump look bloomin’ awful – but I’ll worry about that another day

“There’s no call for 1/2″ UNF nuts these days, so you’ll have to order a bag of a thousand” is what I knew the chap at the factors would say when I went looking for some.

Whilst putting the ARB on though, I smacked my head on one of the axle stands, rolled over with mild concussion, cursed a bit and when my vision returned I saw the two nuts poking out from underneath the edge of the rug

Next job is to ask the fishmonger to get me an octopus to help me putting the new steering rack in, as the new bushes seem to be a bit of a bugger to fit