After all the recent fun I had trying to get a Xino Basic and ENC28J60 ethernet shield (remember they’re both from Ciseco, mind) running together from an external PSU, I was left wondering if there might possibly have been a similar path I could have taken that would involve a little less pissing about with regulators that aren’t up to the job.

Staying on the same “indie” side of the Arduino fence is the Nanode, an Arduino-alike with on-board ethernet that came out of work at the London Hackspace. Both come in kit form, can operate at either 5 or 3.3V and use the same ethernet chip, whilst the Nanode offers some additional memory and has space for mounting an RFM12B wireless module. The Xino’s got a little prototyping area and the Nanode’s got a mini-USB power connector – you could get carried away comparing everything but it’s basically swings and roundabouts. I’ve set out below the comparative costs to get to the same endpoint; the stackable header kit is included as the ethernet shield doesn’t have through headers as standard and the LM7805 regulator is there because the 5V reg in the kit only passes a max of 100mA, whereas the shield draws around 200mA.

Hmm, I didn’t think it would be so close … 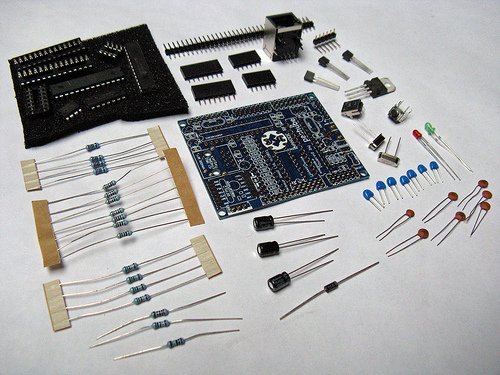 It’s all what I now think of as “pretty standard stuff” with your bare PCB, resistors, capacitors, LEDs, crystals, voltage regulators, headers and chips – just add solder. The build guide is pretty comprehensive and a good frame of reference for a novice; particularly the reminder to use a multimeter to differentiate the 1Ω and 10Ω resistors – if I’d relied on the lighting in my study I would have got it wrong.

With the soldering completed, I only had a few bits left over …  The kit included a “spare” 3.3V regulator, 22pF capacitor and a strip of male headers that I guess are for anyone who wants to put them on the underside to make the Nanode easily breadboard-able. In addition, I was left with a couple of 10nF capacitors, which when I scrutinised the pictures in the build guide I realised should have gone next to the magjack. In my defence, I didn’t just put them there to start with as I wasn’t explicitly told to and the board has a number of spare pads for all sorts of things, some of which it turns out you should never put things on. Well, that’s my excuse anyway 😉

Checking the voltages on the board was delayed momentarily by not knowing which way round the pins on the FTDI connector were oriented. It turns out that GND is nearest the mini-USB connector, if you were wondering. (There’s G and B markings on the board next to the FTDI pins, and I guess now that they relate to the standard FTDI wiring colours of B == Black == GND and G == Green == RTS). Once the voltages were confirmed as up to snuff, I slotted in the chips, powered up the board and hey presto … blinky!

The last step in the comparison was to power the Nanode from the same 7.5V PSU as I’d used for the Xino. All I had to do was hook up the connector to 0V and VIN and it just worked … but that’s not surprising as the Nanode uses a 7805 regulator. If you look closely, you can see the red power LED on the Nanode and the green connectivity LED on the magjack. By the way, before attempting to upload your sketch to the Nanode, don’t forget to set your board type to “Duemilanove w/ ATMega328” or it won’t work.

So what’s the conclusion then?

I guess I gave the game away with the post title, really. In terms of simply getting the job done, then – on the face of it – the Nanode looks like a straight winner, however, to be fair to the Xino I’m not sure how much of the straightforward-ness of the Nanode’s build was down to what I’d learnt with the Xino. If I had never done the Xino, would the Nanode have been so simple? In all honesty, I don’t know – but I do know that it felt like less hassle.

Which would I use going forwards then? For the sake of a couple of quid cost difference, the Nanode is the winner if what you’re after is an ethernet connected Arduino-alike. If you don’t need the ethernet, however, the Xino is great for giving you something you can just put into a finished project, without the extra cost of buying an actual Arduino Uno, say.