OK, first up – those pesky ARB chassis brackets. Each had one broken bolt stuck in them that had sheared off when removing the ARB and which was rusted in solid. No amount of Plusgas was freeing them up, but to be fair, it wouldn’t have done much good as there wasn’t really anything left to get hold of.

In to college then and time for a play in the Mech. Eng. shop…

None of the smaller machines liked the high-tensile bolts at all, so I lost a load of time on them before moving over to the daddy machine. With cutting fluid and a gentle touch I eventually drilled out most of the bolt, then punched out the remainder and cleaned up the thread

The old TCA hardware has been checked, cleaned and is ready to go back on. 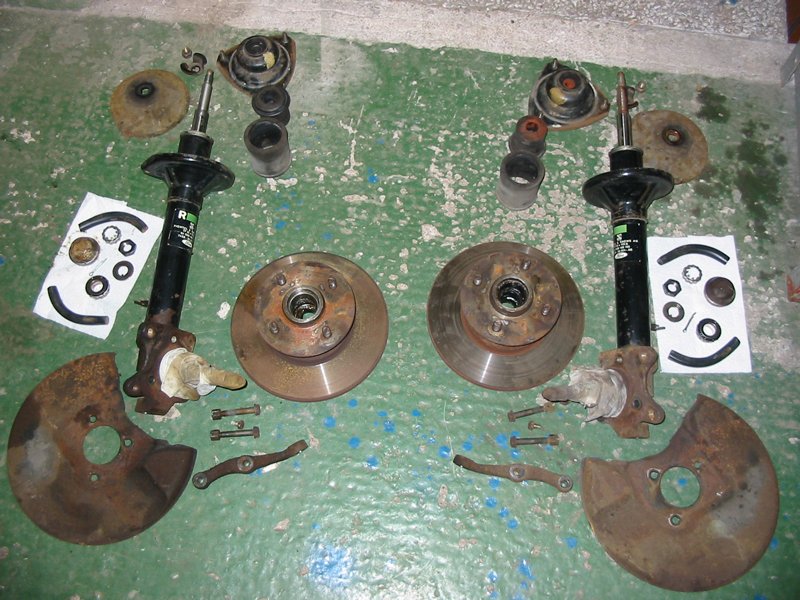 That loose nut that I’d found on the back of the steering arm was on a bolt whose head sits behind the brake disc, so there was no other way to get to it anyway.

What was there was decidedly manky and black

but after cleaning everything up, there was no signs of scoring or free-play in them.

The rubbers top and bottom are off the old springs and apparently aid location of the spring in the cup – I’ve seen it mentioned to transpose them over to the new springs, so I’ll just follow instructions

Next job will be cleaning up the top cups, hubs, back plates, steering arms and the bottoms of the struts ready for re-assembly

I know some people would have had all this lot done in “a few hours”, but I don’t mind that I just don’t work at that pace

dangerousdave : With regards to packed with grease, the bearings need packing with grease, and also the cup which it sits in needs a smearing of grease, but that bit under the cap doesnt need any grease as theres no bearings past the washer on the back of the bearing under the nut