Measuring the current draw of an Arduino project

A number of times I’d seen Arduino folks casually say “just measure the current draw of your project” when discussing some technical aspect or another, but in all honestly until recently, had only the vaguest clue what they were on about. There’s a number of great articles online about how to test a generic circuit with a multimeter, but they seem to skip over actually measuring the draw of an Arduino project itself. For the benefit of anyone who makes it through to page 37 of a Google search in this respect, I present to you a quick guide.

To be able to take a measurement, you need to put your multimeter in series with the power supply for your project. This precludes powering your Arduino from its USB port or the DC barrel jack – unless you want to start hacking into a perfectly good cable coming from your computer or PSU before it reaches the Arduino. On the assumption that you instead wish to follow the simplest path, use a separate power connection for testing (such as a DC barrel jack on a breadboard, or a 9V battery connector)  and take the positive lead from your power source to one input on your multimeter and connect the other input out to VIN on the Arduino. What with a picture being worth a thousand words and all that, I’ll show you what I mean… Before you begin, remember to set your multimeter to measure current if you want to avoid breaking things. On my cheapy auto-ranging meter, I turn the dial to the “mA” setting (to say I want to read milliamps) and press the “Func” button to switch to DC measurement.

As we can see above, a bare Arduino Uno doing nothing is registering as 53.9mA, so for the sake of providing a few comparisons I took a few more measurements; 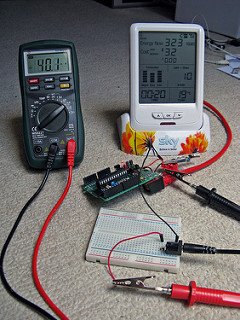 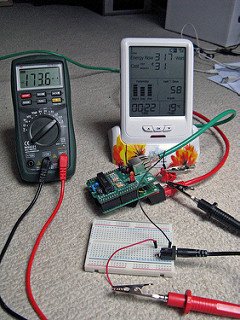 As a slight diversion, some folks want to be able to measure the current draw of their project from within their Arduino’s code environment; whilst this is apparently possible, it requires extra circuitry, which means that your project is different when you’re taking the measurements, which means that the measurements are probably different to what the actual readings would be if you didn’t have the extra gubbins in there … in essence, keep it simple and just use a multimeter.