First steps with a GPS module

A while back I saw a new product on Adafruit’s blog and instantly thought “I gotta get me one of those!” Its official title was “Adafruit Ultimate GPS Breakout – 66 channel w/10 Hz updates – MTK3339 chipset” and the feature list just kept on scrolling down the page. Now, I’ll be the first to admit that I had no immediately obvious plans for connecting an Arduino up to a GPS module that could track up to 22 satellites on 66 channels, provide 10 updates per second and store a log file of position data to on-board flash memory for about 16 hours worth of data, all for just 39 dollars … so obviously I popped it into the basket to see how much shipping would be and it’s a good job I was sitting down! 39 dollars for the shipping and I’d no doubt get stung for some import duty and VAT too.

Thankfully, UK distributor Proto-Pic has an option on their site to ask about products they don’t currently stock and they rather nicely said they’d put a few on their next order and let me know when they came in. Scroll forwards a few weeks and an email drops into my inbox and bugger me if they’ve not managed to get these little marvels into stock for a mere 27 quid. Well, at that price I’m sure I can find a use for it eventually… 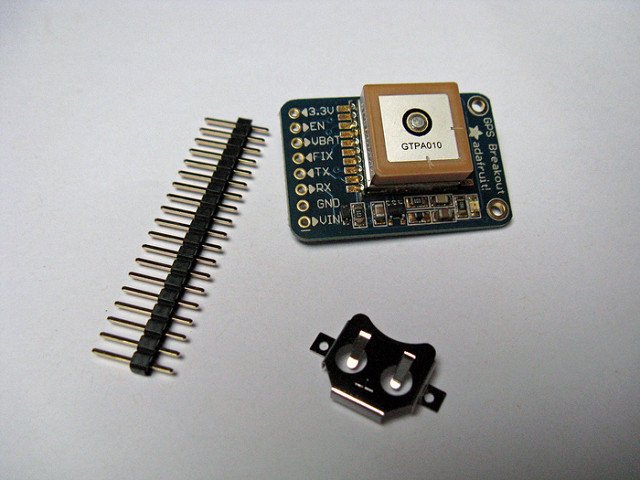 In the kit, you get the board itself, a header strip and a coin cell holder (to go on the back) to keep the built-in clock running when everything else is powered down. In mere seconds, I’d soldered on the header  and hooked it up to the Arduino following the nice and clear Lady Ada tutorial, uploaded a test sketch, dangled the breadboard onto the window ledge and opened up the Serial Monitor. It sprang into life immediately and only took a minute or so to get its first fix.

Yay, success! It’s great when things just work like they’re supposed to. My office is actually about three metres south-east of that position, but to be fair I’m in a loft conversion and surrounded by foil-backed insulation panels with the unit sitting in the frame of a Velux window – so I don’t think it’s doing too badly (my Galaxy S2 puts me in almost exactly the same position but floats around a lot more).

If I get a chance over the weekend, I’ll put it in a box with a battery and take it out for a bit of a drive and see how the logging works. I vaguely remember seeing somewhere that there was a site I could upload the data to that would give me a map with an overlay of the logged route and a roller-coaster-style 3D representation of speed at each point.