An Ethernet shield for a tenner?

Last week I got a hold of a new kit from Ciseco for an Arduino ethernet shield based on the ENC28J60 chip and spent some time today soldering it up. Now, to be brutally honest, the only soldering I’ve done for a long time before now involved a gas-powered iron and a Ford Capri, so I wasn’t sure how much of a challenge the kit would be, but I was pleasantly surprised.

Yes, it took me more than the “half hour or so” the build guide reckoned it might, but I didn’t set fire to anything and had no spare bits left over at the end of it, so I’m reasonably happy. 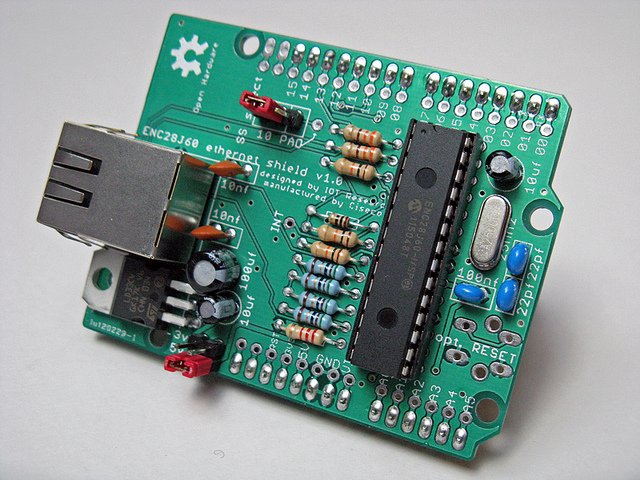 I followed the build guide and there’s a couple of points that caught me out (that might have been addressed by the time you read this);

Modifying the testDHCP example from the library to explicitly specify pin 10 is as simple as;

However, in the long run I might use the pad on the board (next to the “SS Select” jumper) and make a link to pin 8, so I don’t forget to make changes each time I’m invoking ether.begin().

Putting it all together, I then hooked straight onto the network with a DHCP-issued address.

More testing to follow, but you can’t argue with an ethernet shield for a tenner, can you?