A blue dash for a blue car

Now, don’t all die of shock, but I’ve gone and spent some money on the refurb.

A quick trip to Ultra Leds has bagged me some “mini light tower” LEDs for the dash illumination. They’re actually a small cluster of 9 LEDs on a wedge base for all round illumination, as opposed to the limited head-on range of a single LED. What the heck, it’s an experiment

They’re actually slightly wider than the hole in the back of the dash pod (by about a gnat’s whisker) so you can’t push them through in the holders, so for the moment I installed them by removing the gauges first. It’s a kludge, but if they work fine I’ll just finesse the holes slightly later on to make enough room to get them through.

To remind you, this is what the standard wattage bulbs behind the blue covers give you (when they’re not blowing continually)… 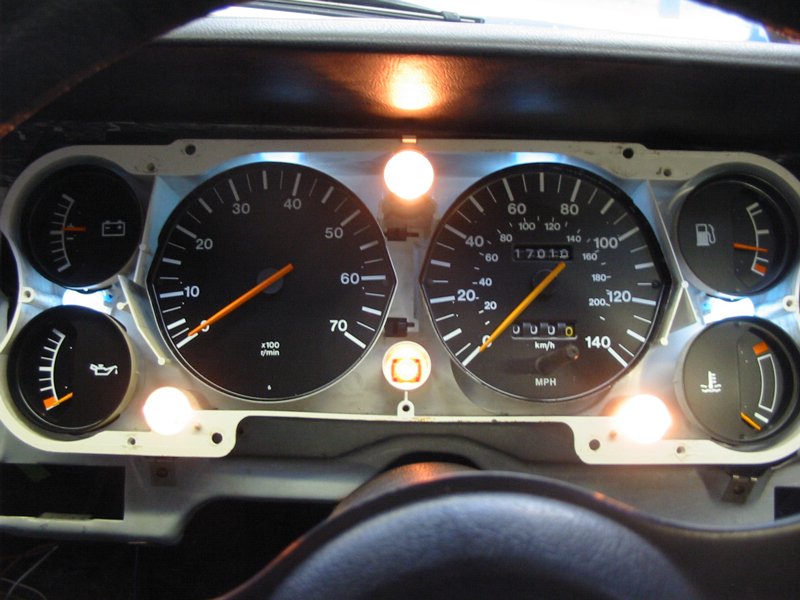 And this is what the blue LED towers give you …

Being about 5mm or so taller than the standard bulbs, they’re very close to the backs of the gauges, so when I get time I’ll run them for an hour or so and make sure everything’s OK. For now though, I’m quite impressed

Moving on to the oil pressure gauge – I got an oil pipe a while ago which now needs routing through from the engine bay to the dash. It’ll come through the bulkhead in the same grommet as the feed wire for my electric fan indicator, but before I do that I need to make sure I’ve got everything.

The brass union fits onto the back of the gauge quite happily, but at the other end there’s a similar sized union (1/8″ 14tpi???) that needs to fit onto “something” that I’m missing – which needs to go into the 1/4″ 27tpi (???) hole in the block left by removing the old oil pressure sender. I’m guessing my missing bit is a male-to-male adapter of some kind … Burtons list a load of different ones – is it any of them do you know?

For anyone who’s interested, you need a 24mm spanner to undo the sender … and being a big spanner means that when you try to get it on the sender, it clobbers the bulkead, or the engine mount, or the dipstick tube, or the intake manifold …

Perseverance is the key here

Thats the t piece you need stu, your sender screws into the end and then you need a small adapter to go from the small hole on the top to your feed pipe