So it works on the bench – what about in the car ?

OK, first up I’ll admit straight off that I spent some time putting a couple of coats of Hammerite on the fan shroud and my new brackets

Having reassembled everything, I then drilled some holes in the bodywork to mount the brackets onto. To reduce vibration and noise, I wanted to put some kind of rubber isolator on each of the brackets … browsing the shelves of B&Q turned up trumps with a 50p pack of 1/2″ tap washers

Well, all that wiring looked tidy when it was on the table, but throwing it into the car makes it look rather like the cack-handed attempts of a wiring novice

, I just can’t think how best to re-arrange it all at the moment and I didn’t want to change it before I made sure it at least worked on the car. Besides, it’d be a bit tricky for me to see the little blue light from the driver’s seat

Anyhoo, popped the temp sensor into the top hose, topped up the coolant and fired up the engine. After a few minutes, the light came on and the fan whirred into life. 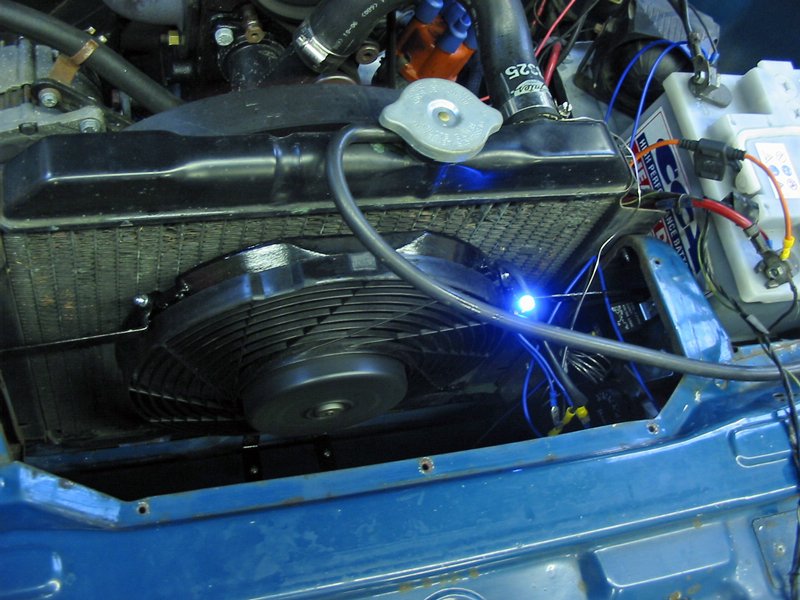 The rubber washers seem to have helped dampen down vibrations, so we’ll just see how we get on in time. I switched the engine off and the fan kept going – exactly what I wanted – and after another minute or so it shut itself down

Only real problem is that the top hose has got a leak on it at the rad end, no doubt due to my dodgy fitting of the temp sender, so that’ll need sorting and then I can think about how best to tidy up the wiring. Is it bad form to run circuits back to the negative on the battery, rather than to a chassis earth?

Also, I know the 20A fuse is meant to be “as close to the battery as possible” but I think that’s taken a bit too literally at the minute – having the fuseholder dangling down around the edge of the battery area seems wrong, so I’ll extend it through and into the front section where everything else is, unless someone tells me not to.

EDIT 10/02/08 :
dangerousdave : Stu as for the wiring the earth back to the battery, theres no need. The battery neg is connected to the chassis and the block. They are both made of a conductable metal and so by going to the nearest bit of metal it will earth just as well as it will when connected to the battery, provided the earth point is clean metal and not rusty/painted. Also by doing this you are saving weight and money and complicated wiring by using less wires