Nurse, pass me that spanner

Imagine, if you will, that a week has passed… The front end of the engine is in a right state and lurking underneath all that dirt, goo and crystallised rust is undoubtedly the explanation for the seemingly inoperative cooling. It’s all ripe for a tidy up and new belts, particularly as I can’t find anything to tell me when the last cambelt change was.

The thermostat housing came off without a fight, though I’m not sure how sarcastic the Haynes is being when it says to “recover the sealing ring” and inspect it before re-using … it’s the decomposed rubber remnants at the top of the picture.

Having read about the restorative properties of vinegar elsewhere, I sneaked a couple of bottles of Tesco’s cheapie stuff into the “big shop” trolley, figuring I could get away with it at 17p a bottle.

I put the housing into a 50:50 vinegar/water mix and left it overnight, then gave it a good scrubbing with a (softish) brass brush. It wasn’t the factory-fresh result that some have had, I’ll admit, but it’s shown it has some merit for further investigation.

A couple of coats of Hammerite and then in goes a new thermostat and gasket kit (sealing ring, metal clip and gasket), all sourced from Burton Power.

To undo the tensioner plate, you need to undo the bolt above-left of the guide wheel and then use a “special tool” to undo the bolt holding in the tensioner spring and the plate itself. It turns out that this requires an M8 multi-spline bit (i.e. it’s got 12 splines), so a Torx bit, or anything else in the bottom of your toolbox is probably not going to be suitable. I gave in and picked this set up at the local factors for about six quid.

The new cam belt has been sat on the shelf for months. If this picture helps anyone, it’s a Gates 5069 and it fits a whole host of motors…

And here it is on the engine. Before you get that far, you need to take off the crankshaft pulley, which means removing its retaining nut. There seems to be as many favourite ways of doing this as there are flavours of ice cream, but for me, I put it into third gear to lock the crank, got my biggest breaker bar, gave it a gentle pull to tighten the nut and crack the seal, then pushed it away and the nut came undone quite easily.

The old water pump housing was looking like the Dr Who special effects team had been at it, but the internals looked okay, so it got a quick clean up, a new gasket and went back on the engine.

When I came to put on the new bottom radiator hose that I’d bought a couple of months ago, I was reminded of the need to double-check what you get as soon as you get it – the original’s on the left and the “replacement” is on the right. There wasn’t a cat in hell’s chance of it fitting, so that was the end of another weekend!

Ordered the correct one from a different supplier… 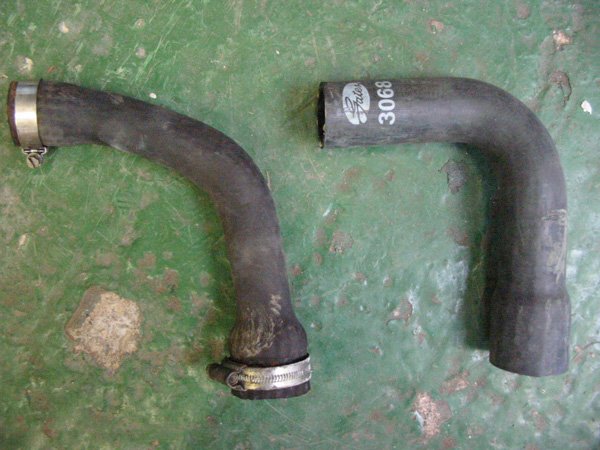 Using Gates’ online catalogue, I see that the hose is actually for a Cortina/Taunus – ho hum ! I guess it’ll be easier to just list it on eBay than go through the palaver of sending it back for a refund.