Finally got some time last night to take the head apart ready for cleaning, and as usual took my time – so compared to some it probably looks like I achieved about five minutes worth of actual work

Doesn’t bother me though, as it’s only when I’m taking stuff apart that I’m getting to see how they work, in ways that a book can never hope to manage

One slight problem with starting from scratch is that you’re continually off out to buy new tools halfway though a job. This is my new valve spring compressor.

And here it is in use. You position one end over the cap on the top of the valve spring with the other end on the valve face, then push the yellow handle down – which squeezes everything together, compressing the spring.

Up close, this is a compressed spring. In the middle is the valve stem, and around it is what looks like a washer. This is actually the “collet” and is two pieces that slot into grooves in the top of the stem and stop the spring from pushing the retaining cap off. 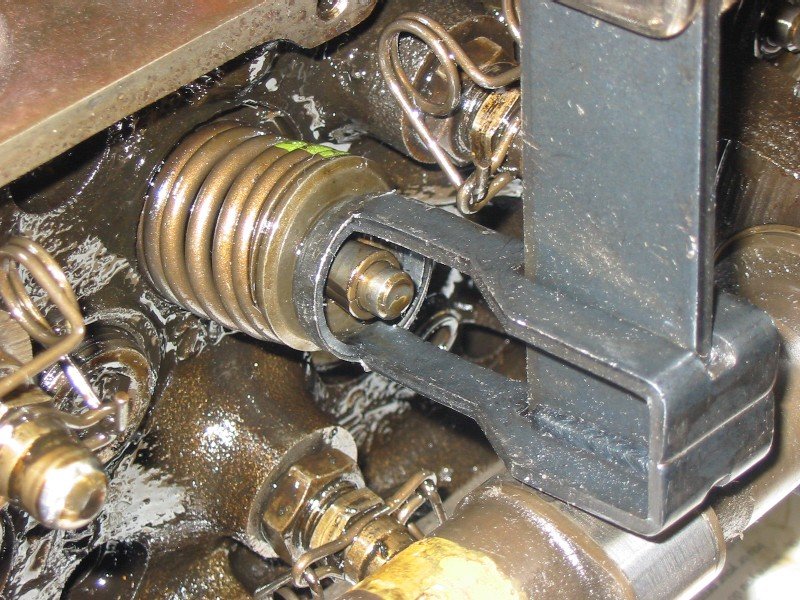 Wiggle the collets off with a tiny screwdriver and remove with long-nosed pliers – you don’t want to lose them, so be careful. Now we can see how the bits fit together.

It’s apparently very important to keep all the bits for each valve together and re-install them in exactly the same sequence, so a potting tray forms a makeshift stock control system

Here’s the now bare head, ready for a bit of a clean up. The only thing left to take off is the old valve stem oil seals (on the top of each valve hole) which have gone brittle and welded themselves on over time.

Once they’re off, I’ll start with the de-coking, then clean the head up, ready to start installing the new seals and gaskets – so that I can get back on the road whilst we’ve actually got some nice weather

EDIT (regarding grinding the valves and seats) :

Dave said : I cheat.
Cut the wooden stick in half and put one half in an electric drill.

It might not be the best/proper way to do it, but it works and none of my cars have suffered because of it.

DarthVader said : I do the cordless drill as well, except I put the shank of the valve in the chuck and pull the valve against the seat.

Perky said : Put a dab of grease on the collets, helps to stick the one to the valve while you fiddle round trying to get the other one in.